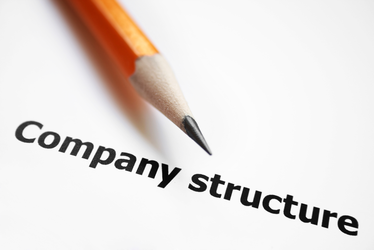 Holding companies are more commonly seen as an organisational solution for larger businesses but they can also be useful for smaller corporate structures. The term is normally used to refer to a company that owns all, or a significant quantity, of the shares in another company. Put simply one company owns the other.

Smaller businesses may use a holding company to separate two sides of one business. For example a distributor may keep the retail and wholesale business under separate companies which are ultimately owned by the holding company. Another reason may be to purchase another business or to distribute profits from one company to another.

Large corporations often state that their main motivation for reorganising in this way is to give their investors a clearer understanding of what is happening in each part of the business. In the case of Google, the holding company owns a lot of smaller companies which each control different areas of the Google business. So, instead of all the businesses showing under one set of financial results, investors can now see how each part is doing in its own right. A major advantage of this approach is that should any of the companies run into any issues, they are separate from the other parts and therefore can be dissolved or managed without any negative affects transferring to the other trading areas.

Companies often use a holding company as a tool to protect a well performing arm of the business from potential losses elsewhere. A chain of newsagents may have 9 profit making outlets and one that is losing money. The loss maker can be sold or wound up without causing any disruption to the others.

Another common use for holding companies is asset protection. Separating out one or more areas of the business, such as in the example of the newsagents, means that if you do wish to sell assets owned by one company (for example, a freehold property or shop fittings) these will be accounted for separately.

No matter whether the assets are tangible (e.g. buildings, vehicles) or intangible (e.g. patents, trademarks) a holding company is a commonly employed tool to separate the asset from other areas of the business that may affect them.

How to form a holding company

Although there are lots of different ways to do this, the most common is to form a series of private companies limited by shares. After this, you would make your main ‘holding’ company the majority shareholder of each of the other limited companies so that it owns them. It is as simple as that. You will now have a holding company and a number of wholly, or partly, owned subsidiaries. The structure used can be quite simple or more complicated with several holding companies within a tier of businesses.

Holding companies can be registered online using Simple Formations. You create a new company and make it the owner of its subsidiaries. These may be existing companies, in which case you will need to transfer the shares, or you may choose to register new companies that are owned by the parent or holding company.